The first DNA test that I can remember was released in the mid 1990s by VetGen for von Willebrands Disease (vWD). The Doberman community readily embraced the test as a way to eliminate affected dogs from the gene pool. Prior to that develop- ment, we had relied upon the Elisa Assay test by Dr. Jean Dodds, which measured the amount of von Willebrands factor (0 to >100) circulating in the blood. When breeders began using the DNA test, they found little correlation between the Elisa claims and the VetGen DNA results. That is to say, dogs who tested low on the Elisa test did not always come back as DNA affected, and conversely some dogs who were high on the Elisa test did yield a DNA affected result.

To further complicate matters, errors started cropping up with Vetgen’s tests. Many dogs were rechecked due to the offspring not testing true to the parentage. Soon, a second and competing laboratory began offering vWD DNA test- ing, and many breeders and owners believed this lab to be more reliable. However, a patent infringement lawsuit by VetGen ensued, and the competing lab was quickly shut down.

Fast forward to where we are today. A quick Google search turned up more than ten labs offering DNA tests for genetic disease. Embark, as the official test of West- minster Kennel Club, was atop the popularity list. From a simple cheek swab, this lab will provide results to more than 170 known canine genetic health problems for 250 breeds of dogs. Wisdom lab offers tests for 150 genetic conditions to 350 breeds of dogs.

The AKC currently registers 193 different breeds, so ex- actly how do these labs offer tests for 250 or 350 breeds? Are they accounting for the “Doodles” or other hybrids, formerly known as mixed breeds?

Known ailments for Dobermans include Cardiomyopathy, Wobblers, vWD, Hypothyroidism, Chronic Active Hepa- titis, Auto-immune disorders, Dings, Renal Failure, and many others, but are there 170 possible ailments for our beloved Dobermans? I’m no geneticist, researcher or sci- entist, but I’m going to say “no.”

For a few years I have seen posts on social media announc- ing dogs that are clear of all 170+ Embark tests. Having never submitted my personal dogs’ DNA to the one-size fits all genetic testing, I was uncertain how beneficial clear results would be in making breeding decisions or in the future health of my dogs. Recently, however, a dog that I bred was tested with Embark and the re- sults were shared with me.

When I looked through the extensive re- port, a few things struck me. This lab lists any positive test results first, followed by the lengthy list of negative results. In this case, the first thing reported was the re- sult for genes DCM1 and DCM2, both of which the dog in question carries. Next to the result was a bright red warning sign and the bold AT RISK label. For this dog’s owner and myself, we understand what these test results mean, and also under- stand that this does not necessarily indi- cate this dog will develop cardiomyopa- thy later in life. But… for an uninformed owner, this label could lead to all sorts of presumptions. Embark has released an infographic on how to use DCM1 and DCM2 results properly, but it was not included in the report.

I then scrolled through all the results for which this dog is clear. Imagine my surprise when this Doberman tested CLEAR for Terrier, Ridgeback, Shepherd, Boxer, Shar Pei, Labrador, American Eskimo, Irish Setter, Pug, Beagle, Golden Retriever, Cavalier King Charles, Samoyed, Shiba Inu, English Setter, Poodle and Alaskan Husky diseases. (What is an Alaskan Husky?).

The report details a total of 172 tests for genetic diseases, 41 of which are direct variants for specific breeds other than the Doberman Pinscher. I was unable to find Degen- erative Myelopathy or Spinal Dysraphism in this report (unless these diseases are listed by another name), but I know that DNA markers exist for these two tests.

I have some skepticism about the ability of one cheek swab of DNA to be run through more than 170 tests, but again, I am not a scientist. Even when we used to send samples to VetGen, we had to collect three separate buccal swabs so the lab could verify the results.

I digress, as the point of this article is not to cast doubt on the lab but rather to remind breeders that we must not further bottleneck our breed. Health is one of many things we must balance when breeding. Each breeder must de- cide on the things they can and cannot accept, whether that pertains to structure, personality traits or test results. We are at a time when the disease testing options are bountiful and when used correctly can be a valuable tool for the betterment of our breed. It is how we use the re- sults that will determine our breed’s future. 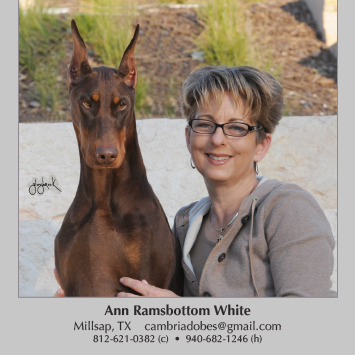