The root of dog shows, or of exhibiting animals and livestock of any species, began as a means to evaluate breeding stock, and the objective of the American Kennel Club (AKC) is to “Advance the study, breeding, exhibiting, running and maintenance of purebred dogs.”

Over time, conformation showing has evolved into a highly competitive hobby, pastime or profession for breeders, handlers and even judges. For many, participation in dog shows has little to do with breeding stock and everything to do with the various ranking systems, be it within your breed, group, all breed standings, owner handler standings or the Grand Championship rankings.

This month I would like to discuss the AKC’s Grand Championship system and my thoughts on how it has impacted and changed our sport.  This title was approved in December 2009 in “an effort to provide our exhibitors with an additional venue to participate in with dogs that have obtained their Championships while assisting AKC Clubs with increasing their entries.”

According to Google dictionary, the word grand as an adjective is defined as “magnificent and imposing in appearance, size or style” or “denoting the largest or most important item of its kind.”

Why then is it easier in many cases to attain a GCH than the basic CH? So often there are majors entered in the classes and only a handful of specials. Judges seldom withhold ribbons, and passing out the Select ribbon is no different.  I have witnessed dogs who struggled mightily to earn majors in the classes and complete their title only to go on and become a GCH with ease, speeding to victory in just one or two weekends.

It is also confusing to me that a class exhibit may be awarded Best of Breed or Best of Opposite Sex over any number of entires, yet that same dog may not be awarded Select. How does that make any sense? The AKC says that a dog may not earn the title of Grand Champion without first being a Champion. However, in the case of specialties or shows where Veterans are eligible for Best of Breed competition, a non-champion Veteran may receive the Select award. I wonder if AKC rescinds the GCH points in this case.

Let’s actually think about the Select award. You are not being chosen as the best entry. You’re second at best, fourth at worst. So, if the Grand CH is to reward the top specimens, why do you earn points if you’re not the best in the eyes of the judge?  In theory, your dog could become a GCHP (the highest level – platinum) without EVER winning a Best of Breed. What does that say about the title?

The other thing that the Select award has done, in my opinion, is take some pressure off of the judges. Consider for a moment that a judge has two beautiful examples of the breed before him/her. Rarely do I see situations where two dogs are worked against each other, moving, free baiting, showing, begging for the win. These showdowns used to happen frequently 15-20 years ago, especially at the large circuits, and they were always a crowd-pleaser. With the select ribbon, the underdog can be pacified, and no one upsets the apple cart, so to speak. In the past, I believe the underdogs won more frequently, but maybe this has nothing to do with the GCH system and is just a result of declining entries and (in some cases) declining quality.

Of course, there are up-sides to this program. Entries of champions in the breed continue to rise, as exhibitors seek either the basic GCH or one of its higher levels. It is a system that keeps people involved in conformation showing for months or even years after the basic Championship is attained. For the exhibitor who owns only one show dog, it is the perfect way to stay involved in the sport and also enjoy the social aspect dog shows offer. It also goes without saying that the AKC, show-giving clubs and handlers all benefit financially from these higher titles being offered.

I do not know what the answers are to the questions I’ve raised but I do wish the criteria for each level of the Grand added something of significance beyond just earning more GCH points. Perhaps a specialty win, a certain number of breed wins, an award at your breed’s National show, a certain number of dogs defeated are things for consideration in the future. Or, maybe not. That is ultimately up to the AKC.

Until next time, stay safe, happy and corona-free! I hope to see EVERYONE back at shows sooner rather than later. 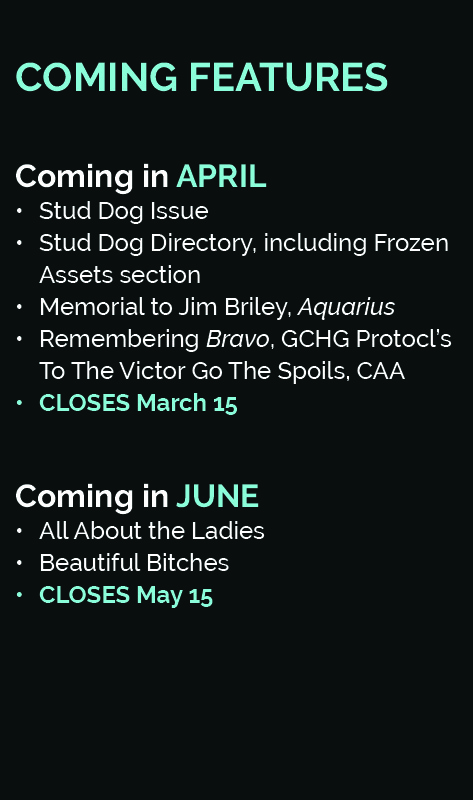